Cytotechnologists are laboratory professionals who analyze cytological slides, a task that involves physical and cognitive procedures performed with the help of an optical microscope1. Their job demands rapid and controlled muscle contraction, coordinated finger movements, precision in movement, attention and visual focus. Awkward postures, speed and repetitive movements contribute to cause musculoskeletal disorders among this population of workers, affecting mainly the back, nape, shoulders, elbows and wrists2,3. The quality of furniture (desks and chairs) is one further factor to take into account. Awkward postures and substandard equipment have negative impact on the health of this occupational group and interfere with the quality of test reports1.

In the present study, we sought to establish the profile of and main musculoskeletal complaints among cytotechnologists charged of analyzing gynecological slides at Integrated Section of Cytopathology Technology (Seção Integrada de Tecnologia em Citopatologia-SITEC), Pathology Division, José de Alencar Gomes da Silva National Cancer Institute. For this purpose we administered the Nordic Musculoskeletal Questionnaire (NMQ) for Cytotechnologists, namely, an adaptation of the Portuguese version of NMQ developed by Serranheira et al.4. Next, we tested correlations between characteristics of workstations and sickness absenteeism due to musculoskeletal complaints. We also analyzed morbidity records kept at the Occupational Health Division (OHD) to perform a descriptive analysis of the main causes of absenteeism among cytotechnologists.

In the present cross-sectional study we analyzed information obtained through administration of NMQ and secondary data collected at OHD.

NMQ was developed by Kuorinka et al.5 to standardize measurements of reported musculoskeletal complaints. This questionnaire was translated into several languages, including the Portuguese version by Serranheira et al.4, which served as basis for the adaptation used in the present study. As exposure variables we considered: sex, age, length of work in cytotechnology, having more than one job, body weight, height, physical activity, number of cases analyzed each day, breaks during tasks, sick leave due to musculoskeletal disorders in life, previous physical therapy, job reallocation, ergonomic microscope and chair, and participation in ergonomic training.

The questionnaire was administered to 32 cytotechnologists in the period from March through June 2017. The collected data served to determine the profile of and musculoskeletal complaints among the participants and test associations between exposure variables and absenteeism.

The secondary data obtained from OHD allowed establishing the number of employees off work in the period from January 2016 through December 2017. This information helped identify the main reasons for sickness absenteeism and its correlation with the disorders analyzed in the present study.

Quantitative data were subjected to descriptive statistical analysis using software Statistical Package for the Social Sciences (SPSS) version 20.0. Association between exposure variables and absenteeism was investigated by means of Fisher's test. The significance level was set to p<0.05.

Thirty-two out of the 40 cytotechnologists working at SITEC responded the questionnaire. Two workers were excluded because they were part of the group that performed the present study, three were on sick leave at the time of data collection and further three refused participation.

Eleven participants required sick leave due to musculoskeletal complaints while working as cytotechnologists and received physical therapy. Three (9.4%) of them also required temporary reallocation. About 87.5% of the sample reported to take breaks during tasks.

Most participants (84.4%) rated their microscope ergonomic, and more than half (71.9%) considered their chair met their ergonomic needs. However, most of the sample (75%) stated they had not received ergonomic training in the workplace.

The main sites of musculoskeletal complaints along the past 12 months were the neck (18%), lower back (14.4%) and back (10.1%) as shown in Table 2. Most of the sample rated the intensity of symptoms moderate. 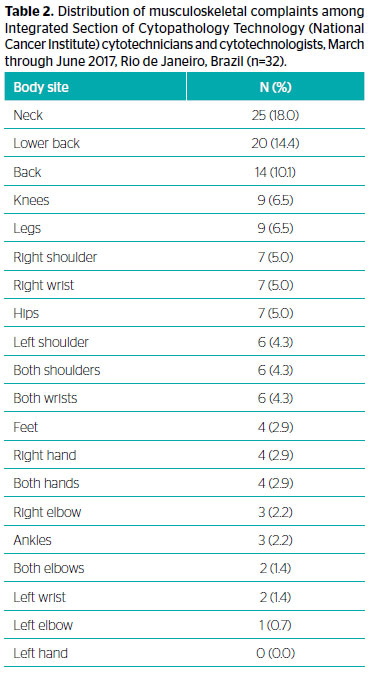 We tested associations between absenteeism due to musculoskeletal complaints and sociodemographic characteristics, health variables and working conditions (Table 3). We found statistically significant association between length in the job and musculoskeletal complaints: the participants with more than 15 years in the job were the group that required more sick leaves along the study period.

We performed a search in the OHD Integrated System of Human Resources Administration to determine the number of workers granted leave in the period from January through December 2017 (Figure 1). A total of 160 leaves were granted to 53 SITEC workers along these two years.

The main reasons for sick leaves granted to SITEC workers were diseases of the musculoskeletal system and connective tissue (25%), followed by mental and behavioral disorders (14.4%) as per the categories in the International Classification of Diseases (ICD-10). Among the former, code M65 - synovitis and tenosynovitis - was the most frequently recorded, representing 25% of the cases.

Administration of the selected questionnaire enabled us to identify the main musculoskeletal complaints reported by the participants and thus perform comparisons with data in the literature. We further tested associations between sickness absenteeism and individual and workstation-related risk factors.

The main involved body sites were the neck (18%), lower back (14.4%) and back (10.1%). These results agree with findings reported in other studies. In the study with 250 laboratory professionals by Agrawal et al.6, 21.2% of the sample reported musculoskeletal complaints, of which 8% consisted in neck pain and 6.8% low back pain. In the study by Jain and Shetty7 with 50 workers who regularly used microscopes, including pathologists and cytotechnologists, 62% of the sample reported musculoskeletal complaints at the time of data collection, affecting more frequently the neck and back. In their study with 78 cytotechnologists, Kalavar and Hunting8 found that 91% of the sample reported musculoskeletal complaints, with the following distribution: neck 62%, hands/wrists 56% and lower back 42%. Among 62 cytopathology and histopathology laboratory professionals in the study by Flavin et al.9, 74.1% of the sample reported musculoskeletal complaints mainly involving the neck, back and shoulders and 20% repetitive strain injury. Gupta et al.10 applied a questionnaire to 132 workers who used optical microscopes and found that the most affected body sites were the neck and back, followed by the eyes, shoulders, arms and wrists. This set of data agrees with our findings, namely, that the body sites most affected among workers who use microscopes are the neck and lower back.

We found statistically significant association between length in the job and absenteeism due to musculoskeletal complaints. In the study by Jain and Shetty7, the prevalence of this type of disorders among workers who used microscopes was higher for those with 11 to 15 years in the job compared to the group with more than 15 years. In turn, Flavin et al.9 did not find remarkable influence of length of work with microscopes on the type of reported injuries. Both the groups which worked more or less than the average number of years (14.5) reported high incidence of musculoskeletal complaints, 42% and 32%, respectively. In the study by Fitzsche et al.11 with 163 pathologists, there was not statistically significant association between length in the job and prevalence of work-related musculoskeletal disorders (WMSD).

We further found statistically significant association between BMI and absenteeism due to musculoskeletal complaints. According to Collins et al.12, obesity and metabolic disorders increase the risk of musculoskeletal injury, and in consequence these conditions significantly contribute to work incapacity and sickness absenteeism. However, neither Sadeghian et al.13 nor Agrawal et al.6 found statistically significant correlation between BMI and absenteeism due to musculoskeletal complaints among laboratory professionals. The reason might be that the most of the participants in these studies were categorized as with normal weight, while in ours less than half (35%) corresponded to this group. We believe that the relationship between these data and previous diseases and medical history might help identify the origin of complaints, which might also be related to factors other than job tasks.

Through evaluation of workstations, the selected questionnaire also enabled us to detect a need to provide ergonomic orientation to laboratory professionals, as well as to implement workplace exercise programs, in addition to raising awareness on the risks to which this population of workers is exposed and how to avoid them.

Analysis of the OHD records showed that the main reasons for SITEC workers to miss work days were diseases of the musculoskeletal system and connective tissue (25%). Synovitis and tenosynovitis accounted for 25% of the cases, being the main cause of sick leave. These conditions were the first acknowledged as WMSD in Brazil and for a long time were associated to typing only. Over time they were further associated with other tasks also involving repetitive movements14.

The findings of the present study point to the relevance of health promotion and disease prevention programs with emphasis on ergonomic interventions to minimize absenteeism among cytotechnologists. Further studies are likely to contribute with additional suggestions to improve the working conditions of this occupational group through ergonomic solutions and thus minimize absenteeism among workers who use microscopes as their main working tool.

The present study has limitations derived from the sample size, inasmuch as a larger number of participants might have led to detecting statistically significant differences in some of the analyses. Then, as in any study of discomfort performed with self-report instruments, bias in responses cannot be ruled out since participants might not be assumed to have fully understood the purpose of a study. In addition, we did not analyze individual factors, such as previous diseases and medical history. Finally, for having resource to a cross-sectional design, we were able to test associations, but could not make causal inferences.

About 34.4% of interviewed cytotechnologists reported musculoskeletal complaints in the period from March through June 2017, mainly affecting the neck and lower back. We found statistically significant association of absenteeism due to musculoskeletal symptoms with length in the job and obesity. The OHD records evidenced that diseases of the musculoskeletal system and connective tissue were the main causes of sick leave among SITEC workers, which reinforces the need for more studies on this subject.