BACKGROUND: The frequency of work accidents involving exposure to biological materials (WAEMB) is significantly increasing. The most relevant epidemiological consequences of this type of accidents are due to the transmission of pathogens including the human immunodeficiency and hepatitis B and C viruses.
OBJECTIVE: To assess the effectiveness of a prevention and training program to reduce the incidence of WAEMB at a teaching hospital along 8 years of implementation. Methods: Retrospective descriptive study based on data obtained from the hospital Human Resource Technology Department. We analyzed records of 1,445 hospital employees who suffered sharps injuries.
RESULTS: About 50% of the incidents were caused by inadequate sharps disposal. The overall rate of sharps injuries decreased by 0.21%/year and that of accidents due to inadequate sharps disposal by 0.36%.
CONCLUSION: The results of the present study indicate that the implemented program was associated with significant reduction of the incidence of WAEMB.

Work accidents are those which occur in the course of work and cause body injuries or disorders resulting in death or permanent or temporary loss or impairment of the work capacity1. They include typical (related to the job characteristics) or commuting (in the way to/from work) incidents, and are categorized as biological, physical, chemical, mechanical, physiological or mental, with variable incidence among different occupational groups2.

Accidents involving exposure to biological materials (WAEBM) derive from direct contact with potentially contaminated body fluids. Routes include percutaneous exposure (sharps injuries), direct contact with mucous membranes (eyes, nose, eyes, genitals) or the skin (intact or not) and bites/scratches. Sharps injuries, which occur while handling needles, scalpel blades, scissors and similar instruments3, are the most common among healthcare workers. Most sharps injuries all across Brazil are due to inadequate disposal of sharps, their incidence being highest in the Northeast region4.

In regard to their distribution per occupational group, most WAEBM reports correspond to nursing technicians/assistants, nurses and physicians. Among the economic activities, hospital care ranked second in number of leaves due to occupational diseases in Brazil in 2014. According to data collected by the Inter-Union Department of Statistics and Socioeconomic Studies (Departamento Intersindical de Estatística e Estudos Socioeconômicos-DIEESE), the number of WAEMB increased from 15,735 in 2007 to 47,292 in 2014. Victims are most frequently females (78.5%) and workers aged 20 to 29 (36.3%) and 30 to 39 (34.7%) years old4.

More than 20 pathogens can be transmitted in WAEMB, being the human immunodeficiency virus (HIV) and the hepatitis B (HBV) and C (HCV) viruses the most significant from the epidemiological point of view5-7. According to several studies, most cases of occupational exposure to biological materials involve these viruses, which in addition to infection, might also cause psychological trauma2,8,9. This type of accidents are considered a medical emergency, and prophylactic intervention should be started immediately to increase its efficacy. Several studies found that a considerable proportion of WAEMB can be avoided through simple safety measures, including raising awareness on the dangers associated with contamination, careful handling and disposal of potentially contaminated materials, and use of personal protective equipment10,11.

Given the aforementioned considerations and the fact that WAEMB cannot be considered to be chance events, the relevance of preventive measures is indisputable. The World Health Organization (WHO) strongly recommends implementing prevention programs against occupational exposure to bloodborne pathogens, in addition to basic occupational health care (immunization), prevention of needlestick injuries, and management of exposures to blood12. Possible preventive measures should be duly analyzed, and their efficacy demonstrated for programs to effectively reduce the occurrence of work accidents.

The aim of the present study was to assess the effectiveness of a prevention and training program in a teaching hospital along 8 year-implementation.

The present retrospective and descriptive study was based on data obtained from the Human Resource Technology Department (STARH) database of Clinical Hospital of Porto Alegre, a teaching hospital in Rio Grande do Sul, Brazil.

After the database curators signed an institutional consent form, we analyzed 1,785 records of employees involved in WAEMB characterized as sharps injuries along 8 years of implementation of a prevention and training program. Exposures to body fluids through intact or nonintact skin or mucous membranes were excluded from analysis.

Analyzed variables were: victim identification data, occupation, accident description, accident location, route, risk (exposure to HIV, HBV, HCV), accident date and time (before during or after a procedure), and causal relationship with inadequate disposal of sharps. As inadequate disposal we considered all incidents following some procedure in which sharps waste was not handled according to the instruction to place it in a cardboard or plastic rigid sharps container. We considered instances of inadequate handling which resulted in accidents through percutaneous exposure, such as needle recapping, and handling or filling disposal containers beyond the recommended capacity, as well as incidents while cleaning the environment (including collection of waste, dirty clothes and materials used in procedures).

THE PREVENTION AND TRAINING PROGRAM

Intervention was designed based on an analysis of the main causes of sharps injuries. The program mainly consisted in introducing/replacing equipment in wards and surgical units to reduce the occurrence of sharps injuries among the employees at highest risk. Mandatory training on adequate handling was provided for each new piece of equipment. Training included reading materials and practical activities. The program evolved along four stages, each lasting about 24 months, to a total of 8 years until implementation was complete.

Stage 1 introduced the use of disposable lancets, and also included training for employees in wards and surgical units to raise their awareness on the relevance of adequate disposal of potentially contaminated materials.

Stage 2 introduced the use of blunt fill needles exclusively for diluting medicines, without involving any contact with biological materials.

The last stage introduced saline pre-filled syringes and blood gas syringes, and theoretical teaching was provided by means of a distance learning system.

WAEMB incidents were distributed per occupation, resulting in six groups: nursing technicians, nurses, cleaning personnel, physicians, residents (in medical and multiprofessional programs) and others (administration). The program evaluation was accomplished for 12-month periods.

Linear regression analysis was performed to calculate the angular coefficient for number of accidents/year per occupational group. The significance level was set to 5% (p=0.05). Analysis was done with software Statistical Package for the Social Sciences (SPSS) version 21.0 for Windows.

The study complied with the requirements described in the National Health Council Resolution no. 510/15, which deals with research in human and social sciences involving use of aggregate, non-personally identifiable information. Ethical clearance was waived.

Of a total of 1,785 WAEMB located in the database, we included 1,445 involving sharps for analysis, 47.5% (n=687) of which were due to inadequate sharps disposal. Analysis revealed an annual reduction of 0.21% in the total number of sharps injuries (Graphic 1). 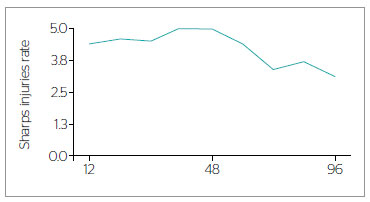 Graphic 2 depicts the rate of sharps injuries due to inadequate disposal per year. As can be seen, frequency decreased by 0.36% (p<0.001) 12, 48 and 96 months after the onset of the training program.

As per Graphic 3, the rate of sharps injuries involving residents exhibited little change, increasing by 9.7 and 11% 12 and 96 months, respectively, after the program onset (p=0.573). The rate of accidents among nursing technicians decreased from 6.9% in stage 1 to 3.9% in the final stage (p=0.013). Reduction from 5.9 to 2.4% was found for nurses (p=0.004). The number of accidents was highest for the group of residents, followed by nursing technicians and nurses. 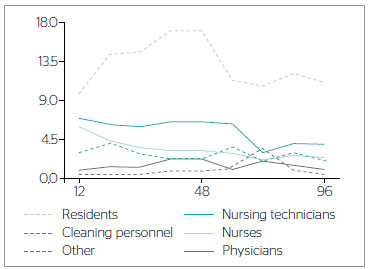 The results relative to the number of accidents due to inadequate sharps disposal are depicted in Graphic 4. The highest number of accidents corresponded to nursing technicians, followed by nurses and residents. From the beginning to the end of the program implementation, the rate of accidents due to inadequate sharps disposal decreased from 6.4 to 1.5% (p=0.00) for nursing technicians, from 4.4 to 1% (p=0.005) for nurses and from 3.5 to 0.6% (p=0.004) for residents. 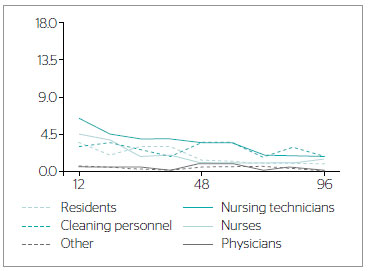 Table 1 describes the distribution of sharps injuries and incidents due to inadequate sharps disposal per occupational group. Nursing technicians accounted for 46% of the former and 62.1% of the latter, residents for 27.1 and 7.27%, and cleaning personal for 8.5 and 16%, respectively.

The results of the present study show that the rate of sharps injuries increased along the first 48 months of implementation of the analyzed prevention program (stages 1 and 2) when it reached a peak. This situation was probably due to increased awareness of the severity of this type of accidents among the targeted population, resulting in improved reporting, rather than to an actual increase in the number of accidents. This outcome was expected and agrees with reports in literature13.14.

After 48 months since the onset of the program implementation, the rate of work accidents considerably decreased. We believe this was a direct result of the implemented program, since by this time stages 1 and 2 had reached the entire target population. As a result, the target population became able to handle the new equipment, and disposable lancets, blunt fill needles, vacuum extraction tube system, rigid plastic sharps containers, single-use lancing device for blood sugar level monitoring, and peripheral intravenous catheters with safety device came to be routinely used in the hospital wards and surgical units. Also, other authors reported considerable reduction of sharps injuries in institutions which implemented prevention and training programs for the employees at highest risk15-17.

Reduction of WAEMB following introduction of new equipment was also reported by other authors. For instance, introduction of taper point needles was associated with a reduction in the number of needles which come in contact with biological materials of about 95,000 needles/month18,19. Another example, frequently mentioned in the literature, is that of rigid plastic sharps disposal containers, which use contributed to reduce the number of disposal accidents among healthcare workers and hospital cleaning personnel at the analyzed hospital.

The rate of sharps injuries among residents did not improve in the analyzed period. In this regard, it should be observed that besides high turnover rates, this group is usually in its second or third year in the profession. According to some scholars, length of professional experience influences the number of work accidents, being more frequent among workers with 5 or less years in the job20.

In turn, the rate of incidents involving the nursing staff exhibited considerable decrease. Worthy of notice, most of the implemented preventive measures concerned the preparation and administration of medicines, which tasks are most frequently performed by the nursing staff. This fact explains the significant reduction in the rates of incidents involving this group. In addition, this finding corroborates the results of other studies, which also reported reduced rates of sharps injuries among nurses in facilities in which prevention programs against WAEMB were implemented8,21.

Nursing technicians, nurses and residents were the most frequent victims of accidents due to inadequate sharps disposal. Nevertheless, the rates decreased over time for all the analyzed occupational groups. We believe these outcomes evidence the relevance of introducing safer equipment in terms of sharps disposal (prevention program), as well as of the efficacy of training on how to properly handle it. Indeed, training does not only improve the understanding of hazards, but also contributes to the implementation of safer measures by demonstrating the relevance of health self-care to workers22-24. Similar findings were reported by other authors, who observed that prevention and training programs had beneficial effects in terms of accidents due to inadequate sharps disposal17.25. According to some studies, this type of incidents is most common among nursing technicians26-29.

A limitation of the present study derives from our difficulty to obtain more information on the analyzed population, since we were granted access only to the records of the hospital employees.

The number of accidents along the analyzed period was highest for nursing technicians, nurses and residents. The number of incidents significantly decreased from the first to the last stage of program implementation, more remarkably in the case of accidents due to inadequate sharps disposal.

We believe that intervention and prevention programs against WAEMB contribute to raise awareness on the risk of contamination and prophylactic means among healthcare workers. Therefore, we strongly recommend mandatory implementation of this type of program in any facility in which workers are exposed to this category of hazards, with emphasis on programs specifically tailored for residents before entering and during hospital work. Healthcare workers help many people, therefore, anyone of them leaving the profession might increase the number of lives lost.